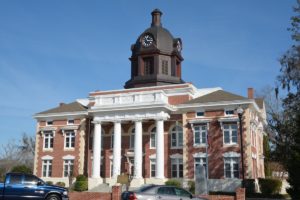 See a radio from the early 1900s, a silver penny and a gun that was actually used in the Civil War. The Courthouse showcases historical documents, photos, artifacts, and weapons, not to mention rare money, antiques, and farm supplies. Located just 15 minutes from Vidalia, the Montgomery County Courthouse is a must-see for the history lover.

Established in 1793, Montgomery County was named for Continental Army General Richard Montgomery, who was mortally wounded during the American Revolution in the attack upon British Quebec in 1775. In 1813, Montgomery County was designated a county seat, and the first courthouse was built. Despite originally being a wooden structure, this courthouse has never seen a fire – quite amazing since it had four wood burning furnaces and paper-wrapped wiring. The magnificent brick, neoclassical revival structure that you see today was designed by Alexander Blair and built in 1907. Located at 400 S. Railroad Avenue, Mt. Vernon.